On our third and final day we had a bike ride planned. If you’ve ever been to San Fran you have seen a million signs about bike the bridge. I love a good bike tour so I was very excited!

The bike tour was a lot of fun. We started by eating bagels that I missed snapping a picture of. Then we started biking. We went across the bridge, into Sausilito, and into the red wood forest. 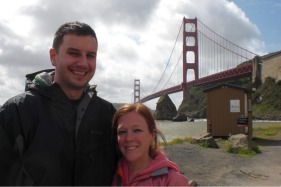 Unfortunately we were given bad information and bike ride became very long… Like 5 hours long. It was very hilly, had lots of head wind, and was rather challenging but we made it to Tiburon at 3:30 after beginning our tour at 10 am. Yeaaaaah.

We celebrated with margaritas at a mexican seafood restaurant in Tiburon. Dan had crushed grape and I was jealous! I usually hate grape flavored things but this was sour and amazing. I had pomegranate and it was good but not as special as the grape.

I had a shrimpy salad and lots of chips and salsa. 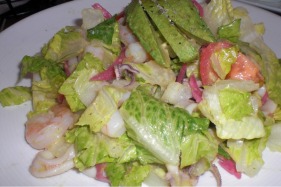 When the worlds longest bike ride ended we decided to transport ourselves to Napa via wine tasting. We each tasted 5 wines. We had some really good ones! This was our second favorite and we bought to drink at the hotel right after (number 1 was too pricey). 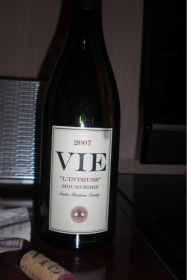 After sipping our wine we were ready for a late dinner and we did the touristy thing and went Boudin (the famous sour dough bakery). Sour dough pizza was a little disappointing. The crust was very good but you couldn’t taste sour dough.

We drank some beers while waiting for the pizza….

After pizza we got really…. Fat. Dan decided he couldn’t go to CA without having In N Out. 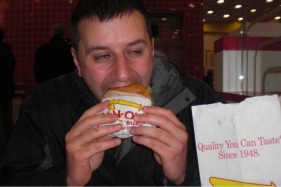 Then even though we weren’t hungry we decided we needed to hit the Ghiradelli trifecta. Butterscotch (left) and peanut butter sundaes (yes I gave up pb for lent, it was Sunday so I was allowed).

I was extremely uncomfortably full after that! It was terrible. But delicious and deserved since I biked to the end of the earth and back.

As I said I didn’t get pics on Monday or Tuesday. But enow I am back on track. Great vacation! I highly recommend visiting San Francisco.

This entry was posted on Wednesday, March 30th, 2011 at 9:21 pm and is filed under Uncategorized. You can follow any responses to this entry through the RSS 2.0 feed. You can leave a response, or trackback from your own site.