I hate people and snow.

My day started off terribly… 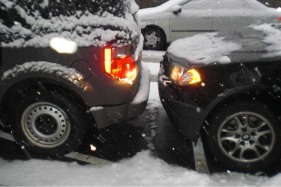 Let’s first start off with how last night i parked 4 blocks from my house so I wouldn’t get another ticket for parking on one of those boxes. This morning, I woke up and trekked to my car in a blizzard. When I got there, my car had been blocked in (bumper to bumper ) by some moron parked illegally (on the box I was trying to avoid). i cleaned my car off and waited…I called the police (what else do you do??) and waited… 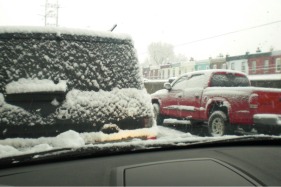 45mins later, she came out and drove away so quickly I couldn’t even say anything. And, apparently without still being parked there, either could the cops. I then sat in traffic for an hour because the snow was coming down and the roads were awful. 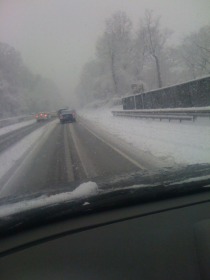 While waiting for the cops to show up, I got hungry and ate this Pumpkin Pie Cliff bar I had in my bag. 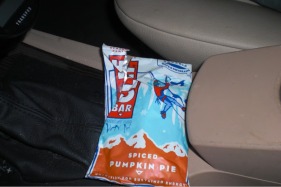 When I got to work, I was very annoyed… as you can imagine… so I treated myself to a coffee with a hazelnut creamer to calm my nerves. I rarely use creamer because so many unnecessary calories but sometimes it’s snide treat. 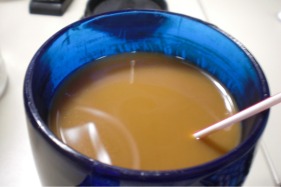 It is still snowing out and only getting worse as I sit in the office. :( I already requested a sub for kick boxing tonight as I don’t want to have to drive in the snow afterward. Looks like living room workout for this girl tonight.

I snacked on this Kellogs Fiber plus Antioxidants Cinnamon cereal (3/4 c for 120 calories) as my morning snack. 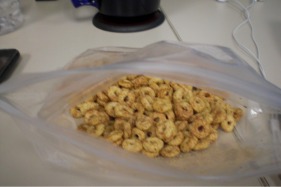 For lunch I had a Lean Cuisine Margherita Pizza. 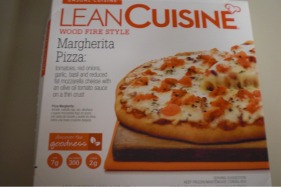 I am out of goya so I covered it in crushed red pepper. 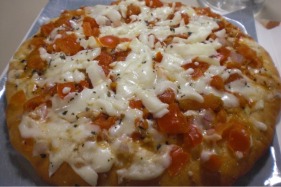 And I cut it into slices so I could savor it. These pizzas are good but pretty small. Cutting up into prices makes it last longer and seem like more food. 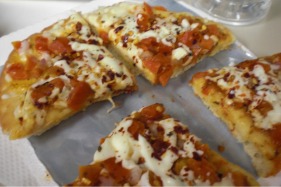 Afternoon snack was an apple and a tbsp of reduced fat pb. 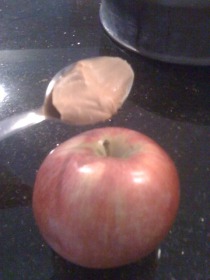 Fitness: Since I left work early to grab a parking spot and missed teaching my class, I did Jillian Michaels 6 week 6 pack again. Such a good go to at home work out. It’s pretty tough at points with holding your body weight and cardio intervals. I used a 10 lb weight this time which made it even harder.

I finished working out and doing laundry by 5pm and was kind of hungry but didn’t want to eat so early. So, I had a snack. Few pita chips (stolen from Lauren) and some hummus. 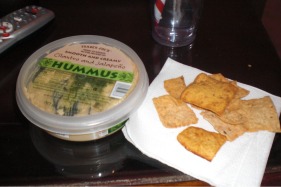 After putting away laundry and scratching some other things of my to do list, I decided I had waited long enough to eat. Dinner was leftover curry tuna, rice, and green beans. This time I mixed it all together and I added some habanero pepper I had from when Dan made chili (recipe to come soon… I promise). The pepper was not hot :( (even with the seeds in) but it did add a nice crunch to the dish. Good addition. 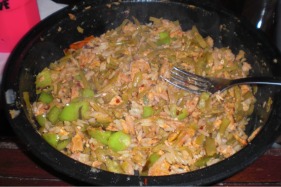 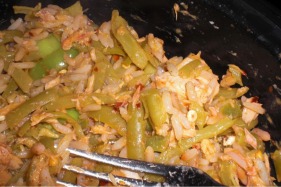 The second time, this dish was still delicious I would def buy this tuna again. Good, easy, healthy fish dinner.

This entry was posted on Wednesday, January 26th, 2011 at 9:28 pm and is filed under Uncategorized. You can follow any responses to this entry through the RSS 2.0 feed. You can leave a response, or trackback from your own site.