Well we won round one of playoffs in volleyball last night in 2 games (tournament is best 2 of 3). Round 2 on Monday!

Fitness: had a tough time but managed get up this morning to go to Spin class fueled by the fact that i had a lame workout on monday.  I went to the other location of my gym and much to my surprise they had gotten new bikes– digital ones!  I was very excited to try them out.  Turns out the digital part doesn’t really make a difference– it actually kind of annoyed me.

The good part about the bikes is it estimated how far you went– that’s something people always ask me in class and i have no idea.  The bikes were also a really smooth ride– probably because they were new and there was also no resistance “chain”/ belt you could adjust which i like because people are always messing with those.   Does anyone else thing aside from the distance calculation the digitized spin bikes are kind of pointless?

Anyway the class was good and I went home and showered and went to work.

When I got to work I decided on a pizza bagel for breakfast. 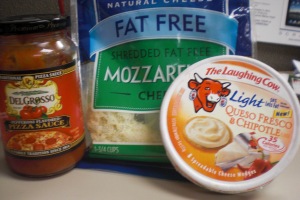 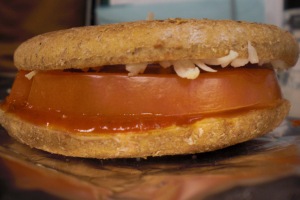 I toasted the thin, topped it with the fillin’ and put it in the toasted over on broil for like 5 mins. Random breakfast to have but it was delicious. They have come a long way with FF cheese– it actually melts now! The laughing cow cheese added good flavor to the sandwich and I am pretty much obsessed with this pizza sauce.

Per usual on Friday I chugged coffee at my desk while working… at work I take my coffee black with one sweet n’ low.

I decided to skip morning snack today in anticipation for a Lunch Club trip to Wendy’s.  I like Wendy’s because they have the meal calculator thing on their website and some good low cal/ fat options.  My order at Wendy’s is always pretty close to this one. 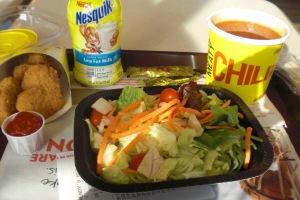 I then pour about half the chili onto the salad [this is actually what their taco salad is–minus the fattening stuff (cheese, tortilla strips, etc)– thanks, CA for her knowledge of fast food]. The whole meal is about 480 calories.. a little more then I would normally have for lunch (300-400) but that’s why I skipped the snack today. ** sidenote I don’t include the milk in the meal calories.  This is because i recently stopped drinking milk because of the calories and i realized that was the wrong thing to do. Milk has a ton of protein which i always need and when I drink it with my meals it helps fill me up, thus i ultimately eat less.

Afternoon snack was going to be an apple but i was fading and needed sugar. Nestle crunch from work candy stash. I ate it slow so it would last longer (twss…). Then I hit up the coffee again! 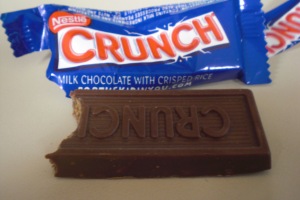 On the bus to NY I had a bag of baked lays to tide me over. The bus was running late and i was ravenous and pouty when i got there.. ask Dan-ielle.

I had googled healthy food near Penn Station the Energy Kitchen came up and sounded intriguing. They had a good menu but the portions were small. For an “appetizer” we shared this bag of chips– they were similar to pop chips. lots of chips today i guess…first taste was bad but after a few more bites i really liked them:

Dan and I split a turkey meatloaf wrap and a bison cheesesteak. both were really delicious just kind of small.

kicked up with this.. not very spicy but tastey and went well on both wraps: 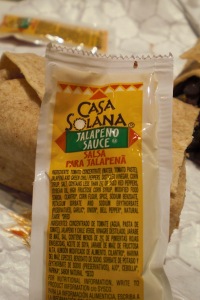 Dan also ordered a bowl of sweet potatoes that I stole some bites of.

we passed a pinkberry so of course i had to hit it up for dessert…I have a new obsession with mochi and pomegranate seeds.

now watching Harry Potter 6 in pjs trying not to fall asleep the 2nd time.. Dans fault if i do…. again.

This entry was posted on Friday, November 19th, 2010 at 11:50 pm and is filed under Uncategorized. You can follow any responses to this entry through the RSS 2.0 feed. You can leave a response, or trackback from your own site.